The Samsung Galaxy Z Fold 3 is running on the Android OneUI 3.1.1 skin since its launch on August 27. This is a variant of Samsung’s user interface that remains exclusive to the Fold and Flip models, mainly because it incorporates the Flex mode. This mode isn’t really new since it was first introduced on the Galaxy Z Fold 2 last year, which I mentioned in my full review as well.

Flex, in English, can also refer to the act of showing off, literally speaking. Showing off! “I’ll flex on you, bro.” But really, aside from showing off your foldable smartphone, what is the point of this Flex mode, and are the usage scenarios really relevant for everyday use? Spoiler alert: Not really, but it’s kind of like the 120Hz vs 90Hz refresh rate debate, once you get used to it you have a hard time without it.

Flex Labs, to bend the interface in two by force

Flex mode literally refers to the ability of the OneUI 3.1.1’s interface to adapt to the angle at which the screen of the Galaxy Z Fold 3 is folded. In order to be more exact, the Galaxy Z Fold 3 needs to be tilted anywhere between 75 and 115 degrees in order for Flex mode to be activated, and this has been available since the Z Fold 2.

This allows you to use selected applications with the screen partially folded in two ways. On the one hand in “laptop” mode will make use of the dual inner screens (the main screen) and on the other hand in “tent” mode, it will use just one screen (see below to get a better idea). Let us take a closer look at the laptop mode.

Also read: Which Samsung do I choose? Our selection of the best Samsung models in 2021

Specifically, when you use an application on the main screen (the section that folds), you can fold one of the two panels to activate Flex mode. Thus, all important information will be displayed on the top panel while the bottom one will feature the application controls or the virtual keyboard, etc…

This allows you to lay your Galaxy Z Fold 3 flat on a table and use it as a mini laptop. During my test, the Flex mode worked with note-taking apps like Samsung Notes or Google Keep. I could type out my notes on the bottom screen in a horizontal virtual keyboard, while the text was displayed on the top screen, in a slightly tilted manner just like a laptop screen.

The same process worked more or less equally well on instant messaging applications. On WhatsApp, I encountered some bugs at first with the top screen turning white when I typed on the bottom screen. But it worked normally after that, so I am not sure whether it is a one-off glitch or it affects everyone. On Telegam, I didn’t notice any visual bugs.

On the Z Fold 2, this feature was known as App Continuity. Samsung preferred to rename it to Continuity this time around, presumably for branding purposes. This feature allows you to intuitively switch from unfolded to folded mode without having to relaunch an application.

This comes in especially handy when you’re using a GPS application like Google Maps. You can explore the map in unfolded mode, taking advantage of the larger display of the unfolded Z Fold 3. But once you’ve decided where you want to go, you can simply fold the phone and the GPS application will continue to function without any interruption.

What is interesting is this: you can also combine this Continuity feature with Flex mode. For example, when I take my lunch break at the office, I watch fascinating videos from the NextPit France Youtube channel with the Galaxy Z Fold 3 in “tent” mode. The screen is slightly folded and the smartphone is flipped like a tent, doubling up as a tripod while the content is displayed on one of the screens. If you’re used to consuming video content on your smartphone, this is almost a killer-feature, and I am not exaggerating (well OK, maybe a little).

Flex Labs, forcing apps to bend to your will

Flex Labs is a special menu in the Samsung Galaxy Z Fold 3 settings that allow you to enable certain experimental features to “force” Flex Mode compatibility with other  third-party apps.

In this menu, you can notably force multi-window and pop-up displays on any application, whether the developer has planned to support it or not, with a generally pretty good success rate. For example, I loved being able to use the Z Fold 3 in laptop mode with a YouTube video on the top half of the screen while my Twitter feed is located at the bottom half.

Also in the Labs menu, Samsung has thrown in a “control panel” to force Flex View mode even on apps that don’t support it. Basically, all app content is transferred to the top screen, while the bottom screen displays a range of controls with buttons to:

I didn’t use this feature much since most of the applications I used didn’t require these functions. Also, this “Flex mode panel” takes up the entire bottom screen, which logically speaking, hinders any attempt at multitasking.

Well, I’ve made a lot of hue and cry about this famous Flex mode. But really, is it useful? No, but it is charming and cool!

It’s not useful in the sense that you won’t use these functions because you need them or because your specific usage pattern requires it. However, it is far less of a gimmick compared to Soli on the Pixel 4 (even though I was a fan of it), or the Fnatic mode on OnePlus smartphones, or the 2MP macro sensor on many smartphones.

However, I also do not intend to dismiss it completely. These are totally optional features that you can live without losing a part of your soul. But if you decide to use them, they won’t taint the user experience. It’s simply a bonus.

Personally, I think it’s also a matter of the form factor. The Flex View mode, for example, allows the Z Fold 3 to be used in laptop mode and would be more relevant if the smartphone were to be slightly larger. With my fat fingers, I found typing on the keyboard rather uncomfortable over time. 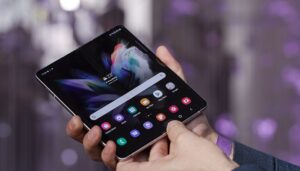