Galaxy S22 Ultra: Everything you need to know about Samsung’s S Pen

The Samsung Galaxy S22 Ultra has arrived and, like its predecessor, it comes with Samsung’s stylus – the S Pen. What is this stylus all about and what you can do with it? Find out here at NextPit.

As expected, Samsung presented its Galaxy S22 lineup to the world earlier this week to much fanfare. Apart from the Galaxy S22 and the slightly larger Galaxy S22+, all eyes were on the brand-new Galaxy S22 Ultra. The premium model is strongly reminiscent of better days when the Galaxy Note was around. Apart from the edgier design that is mainly attributed to the S Pen, we are pleased to note that the S Pen can be slotted into the dedicated slot on the S22 Ultra, quite unlike last year’s model that was poorly thought up. Magnets, Samsung. Really?

We were introduced to Samsung’s smart pen in 2011 when the first Galaxy Note was released. Since then, the S Pen has learned a lot. Before we explore what the 2022 S Pen has in store, you can first check out our hands-on video of the Galaxy S22 Ultra:

You could see it in the video: The stylus is back where it belongs. The Galaxy S21 Ultra was already compatible with Samsung’s stylus, but it did not have room for the accessory, not to mention having to purchase it separately. Samsung thus promotes the S Pen this time around: It has now advanced from being just an accessory to a permanent component of the Galaxy S22 Ultra!

The advantages are obvious: You will not lose the S Pen as easily, and you do not have to buy a special case and it is charged directly when slotted in the smartphone.

Bluetooth support, there you are!

I still have Antoine’s rant ringing in my ears when he complained about the S Pen mess last year. The S Pen had to be purchased separately, couldn’t be housed in the device, and was functionally gimped. That was truly a bad start for the first S Pen for the Galaxy S lineup.

The stylus that ships with the Galaxy S22 Ultra is functionally fully and on par with what was possible with the S Pen in the Galaxy Note 20 Ultra. This means that the new Ultra model benefits from the S Pen’s Bluetooth functionality, which was denied in the S21 Ultra. Galaxy Note fans can thus take notes, translate text, and do much more with the diminutive tool. Here is an overview of the most important functions that you have been able to use for several S-Pen generations:

Create Note: Creates notes in a pop-up window without having to access “Samsung Notes” or another notes app.

Smart Select: Selects an area using the S Pen and performs actions such as sharing or saving.

Screenshot Note: Capture screenshots and annotate it with notes or a drawing.

Live Message: Create and send your own messages with a background of your choice. You can record what you write or draw and save it as a GIF.

Translate: Hold the S Pen over a word or snippet of text to translate what you’ve written.

Bixby Vision: Uses Bixby Vision features to search for similar images, places, or info, or to recognize and translate text.

Zoom In: Hold the S Pen over an area of the screen to zoom in.

Here is another feature that Samsung can be very proud of: You can convert your handwritten notes into text with Samsung Notes, which you can then share directly. Thanks to BLE support, you can also operate your Galaxy S22 Ultra using gestures. For example, you can launch the camera app via “Air Action” and press the shutter button without touching the smartphone screen. You can scroll through apps, zoom into pictures, call up the “Smart Select” feature or increase the volume in the music player.

This is what Note fans have been waiting for: The S Pen fits into the S22 Ultra! / © Samsung

What is new about the S Pen for the Galaxy S22 Ultra?

To be honest, there is nothing much that is new in terms of functionality. Essentially, the smartphone inherits the already known tricks of the S Pen. However, that is absolutely okay because, as mentioned, it is a significant improvement over the S21 Ultra edition. Samsung is currently very proud of the fact that the latency has been significantly reduced once again! Compared with the Note 20, the latency has been reduced by another 70 percent – knocking it down to less than three milliseconds.

The predecessor’s latency of nine milliseconds was already so low that writing felt quite natural. According to Samsung, writing on the Galaxy S22 Ultra’s display now really feels as if you are using a pen and a piece of paper. We will of course report about how natural it actually feels in our upcoming review.

Another point that was important to glean from Samsung at the Galaxy Unpacked event: Sustainability! The South Korean company uses recycled marine plastic in some of its components. For quality reasons, this can only be used to a very limited extent, but Samsung uses this material for the volume rocker and power button as well as the SIM card tray, for instance. Samsung also uses recycled marine plastic for the inner part of the S Pen holder.

All in all, the S Pen has not been completely redesigned or significantly improved. But it can now do everything it is capable of on a smartphone. That’s good, Samsung. In fact, you could have thought of that last year. Let us know in the comments what you think of the S Pen in general and its use in the S22 Ultra in particular. 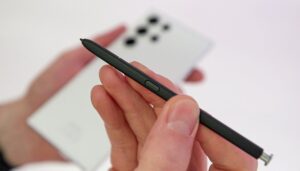