Edelweiss by Above the Treeline Launches Employee Bookclub

Above the Treeline Edelweiss+, the online platform that serves as the primary hub for publishers to market, promote and sell their titles, announced the creation of the Legacy Book Club. The Legacy Book Club is designed for employees to engage in critical and reflective dialogue. This company-wide investment is part of an organizational commitment to address systemic inequities both internally and externally.

John Rubin, CEO & President of Above the Treeline, states, “Two enthusiastic employees came to us with the idea for this book club, and the organization has really rallied around it. We sit at the hub of an industry whose core is about understanding different perspectives and pushing folks to go beyond narrow views of the world. This book club is a great opportunity to live those values internally.”

In January 2022, employees read Abolition. Feminism. Now. by leading scholar-activists Angela Y. Davis, Gina Dent, Erica R. Meiners, and Beth E. Richie. This newly released title is described as a celebration of freedom work, a movement genealogy, a call to action, and a challenge to those who think of abolition and feminism as separate—even incompatible—political projects. During the January Legacy Book Club session, three of the authors – Davis, Dent, and Richie – joined to discuss perspectives and answer questions.

Nikki Siclare, Senior Help Desk and Education Specialist at Above the Treeline, is a co-founder of the Legacy Book Club. In describing why Abolition. Feminism. Now. was the obvious inaugural choice for the club, Siclare states, “The conversations on abolition are growing and changing every day, and we respect the idea of unlearning in order to gain new ways to better our communities.” Deidre Dumpson, Retail and Library Client Success Manager and Legacy Book Club co-founder, adds, “In order to innovate and create radical change, we engage to listen respectfully and actively with an ear to understanding others’ views and collectively form new ideas and ways of being.”

The Legacy Book Club is an organic extension, associated with Ascend (Formerly Treeline2020), of the mindset throughout Above the Treeline. The mission of Ascend is to promote diversity, equity, and inclusion in publishing and technology industries. This is done by investing in organizations that are already doing this work well, supplying access through internships and scholarships, and amplifying underrepresented voices.

Annie Rubin, President of Above the Treeline, explains, “It is not optional to dismantle systemic racism, address climate change, and support LGBTQIA+ individuals. It is an integral part of our company mission and how we choose to make an impact in our world.”

Edelweiss by Above the Treeline empowers the book publishing industry with marketing, sales, and business intelligence tools that make the journey from author to reader more efficient. Over 200,000 book professionals engage in the community and utilize the platform to discover titles and manage the processes that keep them competitive. The company has been privately owned since 2002 and based in Ann Arbor, MI. 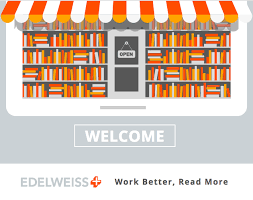