What is a computer? The lines between iPadOS and macOS blur

There was a lot of talk about Apple's advertising for its iPad Pro under the tagline: "What is a computer?" At WWDC 2019 the Cupertino-based company has made it even more difficult to answer this question with the announcement of iPadOS and MacOS Catalina, which are getting closer but are still substantially different.
Post Views: 38
PrevPrevious
NextNext

The question that buzzes in the heads of many Apple fans and technology enthusiasts is: does Apple want to merge its line of Mac and iPad products? On stage at Steve Jobs Theather, Craig Federighi answered this question directly last year:

This year, however, it seems that the company is approaching its products in the PC and tablet markets more and more as one. Whether or not you want to admit it….

More of Mac on the iPad

Let’s start with iPadOS, the name of the new iOS update dedicated to iPads, which will now be separate from the version for smartphones. Apple also announced the arrival of a new, more advanced multitasking system with the ability to open the same app in multiple windows. This, in practice, gives you the ability to open two instances of the same app as on a real PC. On stage, a demo with two Microsoft Word documents open at the same time was shown.

The Safari browser has grown closer to the macOS version with a desktop-grade navigation system should solve one of the biggest complaints of iPad owners. Also, the Files application has been revised with the addition of support for file sharing over a network through the SMB standard and, absolutely a revolution for the iPad world, the ability to manage external storage such as USB sticks, Hard Drives or portable SSDs.

The new iPad Safari even has a download manager! / © Apple

Another new feature of iPadOS that didn’t find a place on the stage at the Apple event is support for a mouse. This is not a definitive function, so do not expect to be able to display a PC-style pointer. However, this function can be activated in the accessibility settings and already seems to work fairly well.

More of the iPad on Mac

Also announced at WWDC 2019 was macOS 10.15 Catalina. It seems to want to bring Apple PCs closer to the iPad experience. In fact, on macOS, there are some functions and aesthetic features borrowed from the iPad. The Notification Center with widgets is one example. The Launchpad that shows the programs and Apps installed looks exactly the same as the home screen of an iPad.

Launchpad on Mac looks just like the home screen of an iPad. / © Apple Support

Last year, again at WWDC, Apple announced the so-called Project Marzipan which aims to unify the development of iOS applications (and in this case with iPadOS) with those for macOS. This year, the Californian company is taking it one step further with Project Catalyst, a new framework that should help developers bring their iPad apps to Mac.

In addition, iTunes will no longer exist. Apple’s popular audio, video, and iOS device management program will be replaced by three feature-focused applications. Apple Music, Podcasts and Apple TV, which will replace iTunes, and have pretty self-explanatory names. The management of the iPhone and iPad will be moved to the Finder.

The three new apps that will replace iTunes. / © Apple

Mac and iPad finally work as a team

Honestly, the most exciting function, at least for me, is called Sidecar. With this feature you can use an iPad as a secondary wireless display for a Mac, providing access to a world of new possibilities with support for touch controls and the Apple Pencil. With Sidecar, Apple has virtually declared war on professional graphics tablets that can be replaced with an iPad Pro, which in many cases has many more features and a higher display quality.

The lines between iPad and Mac are becoming less and less defined. / © Apple

In my honest opinion, the direction taken by Apple is clear. It won’t be this year or next, but sooner or later the company will combine the ultra-portable world of its powerful tablets with that of its laptops used by professionals who need to work on the move. 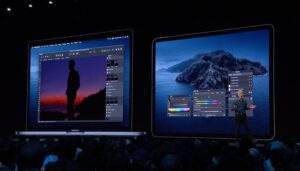