From the first time he used a synthesizer, Illinois Computer Science professor Paris Smaragdis knew that he wanted to learn how technology could make or alter music.
Post Views: 71
PrevPrevious
NextNext

From the first time he used a synthesizer, Illinois Computer Science professor Paris Smaragdis knew that he wanted to learn how technology could make or alter music.

What’s followed is a career in academia that centered his Artificial Intelligence research on the question: What does it mean to take a stream of sound and then break it down into its individual components?

The answers he found over the years helped him produce widely published research and more than 40 patents. But nothing he’s accomplished has been more “mind-bending” than the recent work he completed with a team of engineers to boost the audio quality of director Peter Jackson’s recent documentary titled “The Beatles: Get Back.”

“I remember growing up as a kid, listening through Beatles cassettes while I sat in the backyard. I began to understand that The Beatles weren’t just a big deal because of the music. They were lightyears ahead of others because of the music production,” Smaragdis said. “Being in a position in which I could not only see how they produced their music, but also deconstruct it and undo the mixing, was definitely a mind-bending experience.”

Smaragdis heard from the engineering team working on the documentary, at which point they asked if he could help clean up this treasure trove of old Beatles audio.

The original audio mainly came from one microphone that picked up sounds from a room full of musicians, producers, friends and collaborators. The documentary wanted to extract speech and music from these sounds to properly portray the development of an iconic piece of music to today’s audience.

“That first phone call started with them asking me if this could even be done. I told them that if they tried it 10 years ago, I would say there was no way it was possible. But we’ve had several great advancements over these years that, I believed, could make this possible,” Smaragdis said.

The entire process took the team nine months to complete.

“My focus was on how we could get all of the sounds we encountered separated and identifiable. We could identify Paul (McCartney) speaking over here, or George’s (Harrison) voice speaking over there,” Smaragdis said.

In the end, the months-long process resulted in a clean sound worthy of the documentary and the monumental band.

About The Grainger College of Engineering

The Grainger College of Engineering at the University of Illinois Urbana-Champaign is one of the world’s top-ranked engineering institutions, and a globally recognized leader in engineering education, research and public engagement. With a diverse, tight-knit community of faculty, students and alumni, Grainger Engineering sets the standard for excellence in engineering, driving innovation in the economy and bringing revolutionary ideas to the world. Through robust research and discovery, our faculty, staff, students and alumni are changing our world and making advances once only dreamed about, including the MRI, LED, ILIAC, Mosaic, YouTube, flexible electronics, electric machinery, miniature batteries, imaging the black hole and flight on Mars. The world’s brightest minds from The Grainger College of Engineering tackle today’s toughest challenges. And they are building a better, cooler, safer tomorrow. Visit grainger.illinois.edu for more information.

Building upon a proud legacy stretching back to the 1940s, Illinois Computer Science stands today at the forefront of computing innovation. Collectively, our alumni and faculty have birthed entirely new industries, generated billions of dollars in commerce, created tens of thousands of jobs, and revolutionized how people communicate, shop, conduct business and are entertained. A top-five undergraduate and graduate program in computer science, as ranked by U.S. News & World Report, showcases the Illinois CS experience designed around cutting-edge education and powerful research capabilities. More than 100 faculty members and more than 40 NSF Career Award winners pace the high level of progress sustained within the department. Visit cs.illinois.edu/ to see how Illinois CS is shaping the future of computing. 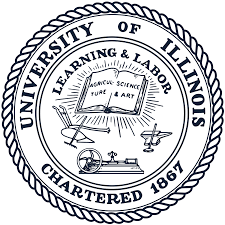