Patricia Jensen’s New Audiobook ‘John or is It Fred:

Recent audiobook release "John or Is It Fred: A Glimpse of the Jensen Family Saga" from Audiobook Network author Patricia Jensen is a passionately crafted depiction of the author's husband's family during the 1920s to 1940s.
Post Views: 33
PrevPrevious
NextNext

Patricia Jensen, a proud mother of two sons, grandmother of three grandchildren, and former co-host of a radio talk show on KKRN in Round Mountain, has completed her new audiobook “John or Is It Fred: A Glimpse of the Jensen Family Saga”: a riveting and potent depiction of a real-life family living through a tumultuous era in American history.

Describing her inspiration for the work, author Patricia Jensen writes, “While cleaning the garage during the virus lockdown in 2020, Bill found the wallet referred to in the book, along with numerous other items in multiple boxes. We had moved from San Diego on New Year’s at the turn of the century, and the boy’s old footlocker toy box managed to house a number of collectable items and family heirlooms. These were boxes of relatives’ memorabilia and old pictures that had been handed over to us from his mom and upon the death of older relatives.”

She continues, “With Bill’s help, I was able to create a timeline of events from the dozens of items we found. His recollection of a number of the noteworthy ones helped create this story.”

She goes on to discuss the process of gathering information for the book, writing, “He helped identify many of the characters in pictures that turned up in this book. He also recalled many stories that his dad, Fred C. Jensen, referred to as Freddie early in the book, told him. He remembered many visits from relatives when he was a boy, and the numerous ‘war’ stories overheard.”

Published by Audiobook Network, author Patricia Jensen’s new audiobook is a personal tale that shares the stories of colorful true-life characters of the 1920s to ’40s as they lived full and adventurous lives. They lived at a time when they were called upon to build a city and a historical dam in order to grow a fledgling town in the desert into what would become the world-famous city of Las Vegas.

The Jensen’s were rugged individuals on a desert frontier living ordinary lives during an exceptional time in American history, and they continually rose to the occasion. They survived Prohibition, the Roaring Twenties, the Great Depression, and the Dust Bowl, in addition to making many wartime sacrifices. Along the way and by complete chance, they bumped into numerous famous personalities.

Listeners can purchase the audiobook edition of “John or Is It Fred: A Glimpse of the Jensen Family Saga” by Patricia Jensen through Audible, the Apple iTunes Store, or Amazon.

Audiobooks are the fastest growing segment in the digital publishing industry. According to The Infinite Dial 2019, 50% of Americans age 12 and older have listened to an audiobook. This huge growth can be partly attributed to increased listening in cars, which surpassed the home as the #1 audiobook listening location in the 2019 survey. Smart speaker proliferation also bodes well for future listening growth and more mainstream listening. 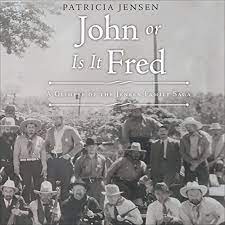