The Indonesian president harbors myriad hopes and expectations for state-owned enterprises and has striven to see them not only advance nationwide but also compete at the international level.
Post Views: 51
PrevPrevious
NextNext

The Indonesian president harbors myriad hopes and expectations for state-owned enterprises and has striven to see them not only advance nationwide but also compete at the international level.

The president believes these corporations hold vast potential to dominate the essential sectors at the onset and also at the global level in later days.

State-owned enterprises only need a professional helping hand and management to assist them to flourish. This is because regardless of how great a company is, once it falls into the wrong hands, its development would stagnate, and it would end up dying.

It cannot be denied that to survive the current industrial revolution, companies need to prepare their human resources and ecosystem to their utmost best. Business transformation coupled with adaptation to the latest technology is inevitable.

State-Owned Enterprises Minister Erick Thohir spoke of three big dreams for SOEs, with one of them being SOEs’ bigger contribution to the nation.

“Again, if it is not just my wishful thinking, it is how to enable SOEs to make bigger contribution to the country. That is number one,” Thohir wrote on his official Instagram account @erickthohir here on Sunday (Feb 20).

The second aspiration is that the number of SOEs would be smaller but larger in terms of their footprints while the third pertains to optimizing the role of SOE services to the community.

These three wishes have Key Performance Indicators or KPIs.

State-owned enterprises were undergoing a massive, intense, and ongoing transformation.

It has borne fruits, as they achieved an income totaling Rp96 trillion until the first semester of 2021, and a net profit of Rp26 trillion up until June 2021.

In 2021, the minister stated that the restructuring program among state-owned companies had been going well.

Thohir’s ministry had been cutting down the numbers of companies which he deemed too many and instead focusing the existing ones to incorporate more important things.

Among the ones undergoing transformation, the association of state-owned banks showed some tangible results.

The minister stated that these banks racked up to 78.06 percent of profit in 2021, while they remain focused on their own segments. These include BRI (Indonesian People Bank) that caters to MSMEs, the corporate-oriented Mandiri Bank, BNI (Indonesian State Bank) with its international scope, and BTN (State Savings Bank) proffering housing-related financial services.

In detail, the association gained around Rp72.05 trillion in profit by 2021, much higher as compared to their collective profit in 2020, which at that time was capped at only Rp40.34 trillion. BRI contributed Rp 30.76 trillion to the pool, Mandiri had Rp28.03 trillion, BNI collected Rp10.89 trillion, and lastly, BTN gave about Rp2.37 trillion.

Coordinator of Indonesian Millenials for MSMEs and Businesses, Syahrul Ramadhan, lauded the minister’s initiative that had encouraged these banks to gain such achievements.

Under Thohir’s command, poor quality directors were replaced with better ones as a means to generate more profits for the state.

Moreover, mapping of business models was conducted since state-owned enterprises had so many businesses to the point that no one was even sure what their focused sector was.

Deputy Head of Commission VI of the House of Representatives Martin Manurung seconded the notion that adjustments in State-Owned Enterprises were still ongoing. Although there were issues here and there, overall, it was doing well.

Indeed troubles from the past still lingered on, though the Commission VI and government were both committed to the betterment of the situation, as was apparent from their meetings.

Manurung affirmed that President Joko Widodo’s (Jokowi’s) hopes for the future to be materialized through a State-Owned Enterprises Law Revision, which was currently being prepared by his administration. He also welcomed Jokowi’s spirit to promote investments.

Essentially, the commission and the ministry are on the same boat on some aspects in the quest to improve state-owned enterprises. These include restructuring, holdings, clusters, and investments, among others.

The commission also agrees to some suggestions made by companies that received Government Capital for corporation acts.

In some instances, the discussions on the Government Capital cannot be avoided. It should be ensured that the capital is used for boosting the company’s productivity, thereby offering significant contributions to the state in the form of dividend, tax, and more.

It has often been stressed that the capital should not be used as a way to cover losses caused by faulty management.

President Jokowi drew attention to several companies that had received too much government capital as a means of protection. This was despite the fact that they made no meaningful contribution for the state.

The president gave a stern warning that no such cases should recur. In fact, he also suggested that the dying companies be closed right away in lieu of having government capital being handed over to them.

The president has sought for such action not out of malice or cynicism but rather based on the spirit to see the companies achieve success together, an expectation which hopefully did not end up as mere dreams. 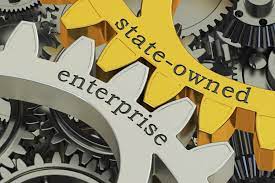