John M. Relyea, who developed his deep love of American history at St. Luke’s School in New Canaan, Connecticut, and the University of Miami, has completed his new book “Distant Strains of Triumph: A Novel of the Civil War”: a gripping and potent work of historical fiction that begins with Shelby Campbell nervously exiting President Jefferson Davis’s office, somewhat taken aback by his new commission; he’ll be leaving Richmond to join his new brigade, command by General James Longstreet.

Weeks pass quickly and his excitement over the new commission is tempered by the bitter and bloody resolution to the battle of Bull Run.

Sent to Richmond on a diplomatic mission, Shelby meets the two women who will occupy his life: Nicole, a Cajun aristocrat from New Orleans, and Elizabeth, the daughter of a South Carolina farmer.

With his work for Longstreet concluded, he returns to Richmond in time for the elevation of Robert E. Lee and the dramatic battle of the Seven Days.

For the remainder of the war, Shelby divides his time between Richmond and the Army of Northern Virginia headquarters, taking readers through the forests and meadows of Virginia, Maryland, and Pennsylvania into the dedicated, deliberate battles at 2nd Bull Run, Antietam, Fredericksburg, Chancellorsville, and the first two days of Gettysburg. Along the way, his circumstances bring him into the aristocratic world of frivolous cotillions and people far removed from the realities of war.

Published by Newman Springs Publishing, John M. Relyea’s enthralling tale follows Shelby as he holds his own on the dance floor and in the front lines of major battles and lesser skirmishes. Through it all, he endures the loss of several of his closest friends and the birth of another.

Readers who wish to experience this fascinating work can purchase “Distant Strains of Triumph: A Novel of the Civil War” at bookstores everywhere, or online at the Apple iBooks Store, Amazon, or Barnes & Noble. 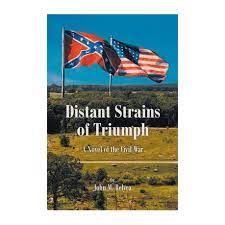