Breathe app: Check out the new Mindfulness feature on the Apple Watch

Let me say it right up front: The new Mindfulness app on watchOS 8 is meant to encourage self-reflection and meditation, which is a topic that might not be everybody’s cup of tea. However, I myself have noticed time and time again with the “Breathe” option that it is capable of relieving my stress levels when I give it a go. With a little bit of practice, you can actually benefit from it, assuming you put your mind to it, that is.

If you don’t have watchOS 8 (which is currently in beta) yet and are considering installing the new operating system now: We’ve put together a guide on how to install watchOS 8 beta.

Over the past few years, the topic of mindfulness has slowly but surely become a trend. Basically, it’s about consciously experiencing or noticing yourself without any distractions around you. If you’re interested in the entire complexity of mindfulness, I would highly recommend you pursue additional reading on Wikipedia.

Personally, I always have a hard time with the term ‘mindfulness’. For me, it means that you should pay attention to your surroundings, and this implies that I should be especially mindful of people around me. In this context, however, mindfulness points to being mindful of yourself.

If you’re interested in the areas of self-reflection, life goal planning, or anything else that is related to technology, feel free to share your thoughts in the comments. Maybe we can pursue this topic in a deeper manner. As I mentioned, I’ve been dealing with this for a rather long time.

Breathing option in the Mindfulness app.

Breathing is a feature that has been around since watchOS 3. Here, the app dictates your breathing rate via haptic and visual feedback. The idea is for you to focus entirely on your own breathing pattern for a preset period of time in order to calm your senses, relax, and ultimately, relieve stress.

You can set just how long you want the session to last, as well as the breathing rate or the intensity of the haptic feedback. We’ll come back to this in more detail later.

Reflect option in the Mindfulness app

I think this is a great idea. The colorful swirl on the display is nice, but it is nothing more than a gimmick. / © NextPit

Reflect is a short mindfulness exercise. The Apple Watch encourages personal reflection and is intended to generate positive thoughts: “Think about something you’re grateful for and consider why it’s so important to you,” could be one such example.

Anyone who has kept a diary or done journaling would be familiar with this methodology. It is actually very effective and often helps to not only generate positive thoughts but also solutions for imminent problems or challenges.

During the reflection session, the Apple Watch will depict meditative colorful swirls on the display, which should also aid in your relaxation process. The following video provides you with a more detailed impression of the app:

Setting Mindfulness on the Apple Watch

The Apple Watch proactively suggests mindfulness functions during the day. In order to set the number of suggestions (including deactivating this function), the duration of the breathing exercise, as well as breathing frequency, in addition to other options, do the following:

Scroll down to the Mindfulness menu item.

Configure the functions according to your preferences. Do you want to be notified directly on the Apple Watch, or would you rather not receive any notifications at all today? All of those can be easily configured here. 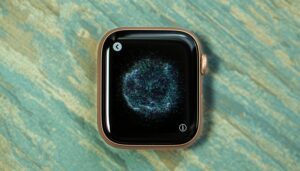