Explaining the blockchain battle of BSC vs. ETH requires a little context. The crypto industry, as it is known, began with a single asset and underlying blockchain — Bitcoin (BTC). From there, people and groups built other assets, blockchains and applications, expanding the potential of the crypto sector as a whole and giving people new opportunities.
Post Views: 54
PrevPrevious
NextNext

BNB vs. ETH — two blockchains amid a sea of others

Explaining the blockchain battle of BSC vs. ETH requires a little context. The crypto industry, as it is known, began with a single asset and underlying blockchain — Bitcoin (BTC). From there, people and groups built other assets, blockchains and applications, expanding the potential of the crypto sector as a whole and giving people new opportunities.

Blockchain technology (or in some cases, other distributed ledger technology) is the track on which crypto assets and solutions run. Builders use this technology as the backend for decentralized applications (DApps) and digital assets.

DApps essentially serve as programs that look similar to other programs on the frontend, touting a user-friendly interface. However, their backends run on blockchains or other distributed ledger technology (DLT). Additionally, depending on the asset, coins or tokens built on blockchains can facilitate transactions and storage of value — free of third-party involvement.

Many blockchains exist as options for developers to work with and build upon, of which the BNB Smart Chain (BSC) and the Ethereum (ETH) blockchain are but two.

Battle of the blockchains: BNB vs. ETH

However, Ethereum scaling has surfaced as an issue, with high gas fees burdening network users during specific periods. (Gas refers to fees paid in exchange for interactions with the Ethereum blockchain). Ethereum proved itself and dominated the crypto space, although given scalability woes, users began looking elsewhere.

In contrast, BNB Smart Chain is a new blockchain that aims to help developers create high-performance DApps, formerly known as the Binance Smart Chain, but it was rebranded in early 2022 to separate itself from the Binance exchange.

The newly dubbed BNB Smart Chain, which is powered by the token BNB, was built to run in tandem with the Binance Chain (now the BNB Beacon Chain). The BNB coin, known initially as Binance Coin, has been renamed “Build & Build” but has the same abbreviation.

The BNB Smart Chain offers the Ethereum Virtual Machine (EVM) and smart contract abilities without producing network congestion and a reduction in throughput. The BNB Beacon Chain (previously Binance Chain) was developed in 2019 to promote quick, decentralized trading; however, it restricts flexibility and scalability.

On the other hand, BSC is an independent blockchain (rather than an off-chain or a layer-2 (L2) scalability solution), which means it would continue to run even if the BNB Beacon Chain went offline for any reason.

Can you send ETH to BSC? Ethereum-based DApps should be able to be set up for BSC functionality, due to the previously mentioned EVM capacity. The Binance Bridge is a platform that allows users to move assets between cross-chains easily. ETH, also sometimes referred to as Ether, is used to pay gas fees on the Ethereum blockchain. Binance Coin (BNB) is used for gas fees on BNB Smart Chain.

Since Ethereum has been around longer, it is a more time-tested solution, which could potentially give builders greater confidence in the Ethereum blockchain. In contrast, though, Ethereum was built using older technology and began changing its framework with the transition to a consensus layer (more on that in the section below).

Another difference — the Ethereum blockchain has more participants running the chain than does BNB Smart Chaim; however, BSC is a community-driven, decentralized blockchain powered by the BNB token. Under a proof-of-stake authority (PoSA) mechanism, BSC has 21 network validators that run its blockchain.

The list of 21 participants is comprised of the largest active stakers of Binance’s BNB asset. Meanwhile, they must be re-elected daily by staking governance to remain in the validator set.

How can you become a validator on the BNB Smart Chain? A validator must create a hardware node with the necessary specifications, run a full BSC node and stake at least 10,000 BNB. That’s not all, though. These are the only prerequisites for being an elected candidate (with the highest amount of voting power).

Alternatively, the Ethereum blockchain has countless miners running its proof-of-work (PoW) blockchain. When the network shifts over to a proof-of-stake (PoS) consensus algorithm, stakers holding a certain minimum amount of ETH will run the blockchain.

A key difference is the point of asset requirements for becoming a validator. Becoming a validator for the Ethereum consensus layer or Eth2 (Ethereum’s PoS blockchain, which is currently in transition from Ethereum’s PoW blockchain) requires staking 32 ETH, among other technical specifications. ETH holders can also pool their ETH with others to meet the minimum requirement, collectively becoming validators that way.

The comparison of various Ethereum staking options can be found in the table below:

In Ethereum’s old PoW system, anyone meeting the requirements could compete to help run the network (by solving puzzles). In contrast, BSC requires staking at least 10,000 BNB (as well as other technical specifications) — just to become a validator candidate. From there, you then must become one of the 21 largest stakers to become an active validator.

Binance is a large company in the crypto industry that has multiple products associated with its name. Is BSC controlled by Binance? Anyone holding enough BNB to compete for a top spot among the BSC validator list can help run the network, so Binance does not seem to control the blockchain directly, although BSC is technically part of Binance’s ecosystem.

Is BSC cheaper than ETH? In general, BSC has made a name for itself as a cheaper option in terms of transaction fees on-chain. Block times for Ethereum range from about 2 to 14 seconds per block, whereas BSC posts about 3-second block times, although Ethereum’s scaling development (Eth2) could change things for Ethereum.

However, transaction costs and speeds come with tradeoffs. BSC has a relatively small number of participants running its network but can offer faster and cheaper transactions.

ERC (Ethereum Request for Comments) standards are used by Ethereum, while BEP is used by BNB Smart Chain (which stands for Binance Evolution Proposal). BEP-20 tokens, on the other hand, have a similar architecture to Ethereum’s ERC-20 token.

The BEP-20 is entirely interoperable with ERC-20 on Ethereum, giving BSC developers the same level of flexibility. Additionally, the BEP-20 is compatible with the BNB Beacon Chain standard BEP-2, allowing them to be swapped evenly.

Ethereum vs. BNB Chain: Which is better?

Will BSC overtake ETH? No one can say for certain, and answers to that question could be subjective, depending on what users seek as far as blockchain attributes and performance.

If Eth2 development goes as hoped, the Ethereum blockchain should eventually offer much faster and cheaper network interaction, filling in its weak spots. Such a change could make a difference in the BSC vs. ETH debate. “Should I use BSC or ETH?” you may ask yourself. That is up to you, void of any jurisdictional regulatory issues.

However, given the blistering speed at which the crypto and blockchain industry has expanded, no one knows what the next year or decade will bring. The industry as a whole went from Bitcoin, a single asset and blockchain, to a bustling industry of burgeoning technology filled with numerous blockchains in a matter of years, not decades.

Tomorrow’s expansion could see BSC pitted against a newer blockchain, or ETH pitted in such a fashion. Two completely new blockchains that do not yet exist could spring up and become the topic of future debates. Therefore, crypto industry education, news and discussions are key components in keeping up with the fast lane that is the crypto industry. 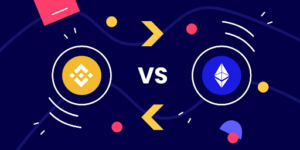