A complete beginner’s guide to buying an e-bike

What will you use your e-bike for?

It’s best to start your search for the perfect e-bike by thinking about what you will use it for. Those who want to commute with their e-bike may want to seek out a folding model or a lightweight model under 45 pounds which could also be carried onto a subway car.

On the other hand, if you’re looking to replace your normal car, you can find a better solution in a freight bicycle, which can still carry a lot of your things by combining a powerful engine with a small trailer. If you have a need for speed: there are also racing bikes with motors or the so-called S-Pedelec bikes with motors over 250 watts, which can go up to 28 miles per hour but have to be insured similarly to a moped.

A key question about the motor

One of the primary questions you should consider when choosing an e-bike is the location of the electric motor. In principle, there are three alternatives: In the hub of the front wheel, in the hub of the rear wheel or in the middle of the bottom bracket. The three solutions each have different advantages and disadvantages:

Motor in the front wheel: minimum effort for installation and removal, and a low-cost solution. But an unfavorable center of gravity and driving dynamics that can take getting used to.

Middle: low center of gravity, stable mounting directly on the frame. On the other hand, higher chain wear and indirect power transmission.

Motor in the rear wheel: direct power transmission at the drive wheel, a good compromise with the center of gravity. But a lot of effort for maintenance, as well as installation and removal.

None of the three options is inherently worse than the others. It all comes down to riding style and personal preference in the end, which is another reason why test driving is always crucial.

Not all e-bikes have the motor in the same place. / © NextPit

Most e-bikes have and need a gear shift. On the one hand, to drive faster than about 15 mph, which the engine may support, and on the other hand to be able to pedal comfortably in all situations. As with bicycles, there are two main types here: Hub and derailleur gears. Exotic e-bikes come with expensive planetary gears.

As a general rule, if you ride mainly in the city or flat country, you can easily get by with a seven-speed gearbox, especially on an e-bike, but also on a normal bike without an engine. If you frequently drive in hilly terrain, you should have more gears at your disposal. A derailleur system is robust and proven, but requires more maintenance than a hub system. But it can also withstand higher force, so it’s not unimportant for an e-bike.

While it’s not easy to compare bikes based on their battery capacity, since performance varies by type of bike, it is possible to divide them into two camps: permanently-installed batteries or removable.

Built-in rechargeable batteries are often more elegant, especially when they are in the frame, which makes a pedelec hardly be distinguishable from a normal bicycle. But that also means that where the bike normally parks, there must be a way to recharge it, because it is difficult to simply take the battery with you into the home and plug it in. If you park your bike in your own garage, you won’t have a problem, but it’s more difficult in the city.

Removable batteries have more flexibility at this point. As a rule, they are locked with a key and thus securely stowed on the frame. If you want to cover especially long distances, you can even get a second battery and get twice as far as with one. So, it’s more practical to use replaceable batteries, but the built-in kind are more stylish – it’s your choice.

The question with the battery: fixed or removable? / © NextPit

There is no general answer to the question of battery capacity, but in general more is always better here, of course. The capacity is given in watt-hours (Wh) and is calculated from the electrical voltage (V) and the charge (Ah). The maximum voltage is quite different. Light city bikes like the Sushi Bike often have a 24-volt battery, while cargo bikes and heavy e-bikes like the Uni MK (formerly Unimoke) have 48-volt batteries. A small calculation example: The Suhsi Bike with 24 V and 5.2 Ah has a capacity of 125 Wh, the Uni MK with 48 V and the largest battery with 20.4 Ah reaches 979 Wh.

Direct conclusions about the range in practice cannot be drawn from this information, too many variables play a role, such as the weight of the bike and the rider, pace, route, inclines, and temperature.

Cowboy Bike review: the e-bike that swaps its chain for an app

An e-bike is still a bicycle, and therefore you should also pay attention to the other components, such as the brake system, brake handles, gearshift and lighting (the latter is usually integrated in e-bikes, since the electricity is always there). The brake deserves special attention on an e-bike, because it has to do more than on a normal bike – since you are often going faster and the bike weighs more. That means disc brakes are the way to go.

By far the best known and most widespread manufacturer of brakes, gears and other bicycle components is Shimano. The different offerings in terms of quality and price are listed in descending order here. Avid and Magura are also recommended brands for brakes.

There are also unusual e-bikes. / © NextPit

How much should you spend?

The question of the price an e-bike or pedelec, of course, depends on your budget. Sure, there are e-bikes in the hardware store or at the discounter for a few hundred bucks, but there are also fine bikes for $5,000 or more. How much should an e-bike cost?

Get on your bike with these 7 great electric cycles

In general, offers below $/€1,000 should be viewed with caution. An e-bike has more components than a bike without a motor, it also has to be more stable and brake better. This all costs money. At the same time, e-bikes are becoming cheaper, bit by bit, due to the increasing number of models and manufacturers entering the market. As a rule of thumb, the following can currently apply: a good, cheap e-bike costs from €/$1,000, higher-quality middle-class models start at around €/$2,000, really good or very special e-bikes, such as mountain bikes or cargo bikes, can also cost €/$3,000 euros or more. Tip: Now that the cycling season is starting, you can find good bargains, even with models from the previous year. Keep an eye on the offers! 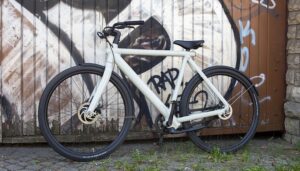