7 important tips to clear up your doubts about Google Home

I’m not sure if you’re already familiar with the Google Home and Google Home Mini universe. The two smart speakers are becoming increasingly popular, and are making their way into more living rooms, kitchens, and bedrooms everyday (I’ve been moving the Mini around my home for months), but they are also raising doubts about their abilities.
Post Views: 58
PrevPrevious
NextNext

It works even without a smartphone

Google Home (and its Mini variant) runs independently of a smartphone. This means that once it’s configured, the speaker will respond to voice commands even if you turn off your device. This also means that you can buy it for a member of your family (like your grandmother) who might not have their own smartphone. In this case you have to configure it through an app dedicated to the device, and that’s it.

How to set up Google Home (Mini) and other useful tips

If Google Assistant is active on a smartphone and home speaker, which device will respond?

If you’ve activated Assistant on both your smartphone and have Google Home in your home, both devices will respond to the ‘Okay, Google’ command. The speaker assistant takes precedence between the two: you’ll have to wait a few seconds before the assistant on your smartphone goes back to sleep.

It should be noted that your smartphone won’t wake up with the ‘Okay, Google’ command. If you have more than one Google smart speaker in the same room, the one closest to you will activate.

Google Home is smart enough to recognize up to 6 different voices. You can then also set up different Google accounts in the same by selecting the Voice Match option: the speaker will respond to the commands of all six users (and can also access different calendars and playlists on Spotify, for example) and will do this automatically, without you having to manually select the corresponding account.

No, you can’t customize the OK Google command

There are currently only two magic formulas to activate Google Assistant: ‘Okay, Google’ and ‘Hey, Google’. These two universal commands apply for everyone and still aren’t customizable, but hopefully they will be in the future.

They are also Bluetooth speakers

Don’t forget the Google Home and Google Home Mini are also Bluetooth speakers. This means that beyond their quintessential smart functions, they can also be used as simple speakers if you’re watching a movie or playing a video.

Finding your smartphone is a piece of cake

If you tend to lose your smartphone in your house when moving in between rooms, you can ask Google Home to find it for you. Just say “Hey Google, find my smartphone’, and your device will start ringing, no matter if it’s an Android phone or an iPhone. So you won’t have to keep running between the kitchen and living room before leaving the house!

Where’s my phone? How to locate your lost (or stolen) smartphone

You can also control a Chromecast with your voice! / © NextPit

The perfect companion for Chromecast

Simply connect Chromecast to your home TV via an HDMI output and you can play movies, TV shows, YouTube videos or your TV via Google Home. You can also play your favorite songs on Google Home and Google Home Mini by connecting your smartphone and speaker to the same Wi-Fi network, inserting Chromecast, and selecting the song that you want to play from the app the app you’re using.

Make the most of Google Assistant with these voice commands 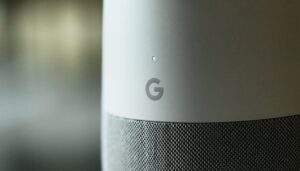